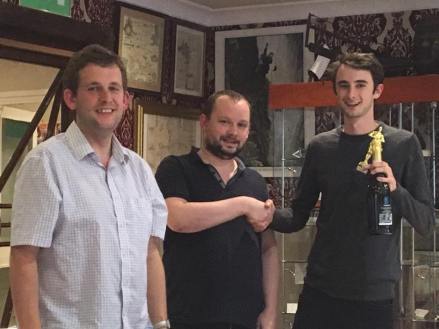 21 people signed up for Sean Fletcher‘s inaugural FOCAL Countdown tournament in Bournemouth, held at Hotel Celebrity near the East Cliff and its glorious views of the south coast. The event helped to generate new interest in FOCAL locally from Bournemouth, Christchurch, Weymouth and neighbouring Hampshire, but the tournament was well represented by the usual regulars from all corners of England — including one holidaying nearby in Purbeck!
The event played out in classroom format with a big screen and computer graphics, driven by Jeff Clayton, using a Swiss format from the morning heats to the evening Grand Final. Everybody was drawn at random into four groups of four or one group of six for the heats stages, the results of which would determine their qualification into tier A, B or C.
All entrants took part in six games across the day:
– Three 15-rounders for the heats. The winners of each of the five groups automatically qualified for group A and they were joined by the three best runners-up, based on number of wins, points scored, and +/- points difference in play.
– A 10-round quarter-final (LLN x3, C) and a 10-round semi-final.
– Then back to a longer match, a 14-rounder based on the old television final format (LLNLLNC, x2).
Again, with thanks to Matt Hamer, the event benefited from automatically generated letters and numbers selections. This included a five-line display for the numbers games, where contenders could agree which selection to play in advance of the tiles being shown, from six small through to four large.
The heats games were completed by the lunch break and returned six players on three wins out of three — Rob Foster, Zarte Siempre, Ann Dibben, Mark Murray, Catriona Cappleman and Tom Carey. The second heat produced no fewer than four nine-letter words and a record available maximum score of 165. This further strengthened the field as the highest losing score was 125. The highest winning score was secured by James Robinson with 152, who correctly played three nines: OBLIGATES, ROUTINING and DEMISTERS. For the record, the other nine in this game appeared in the first round (REPLEATED) and whilst James decided against playing it, his 152 is thought to be unsurpassed in any format.
During the lunch break, everyone took the opportunity to look through Sean’s crossword competition, combining the celebrity theme with wider general knowledge (and some niche subjects!).
Onto the afternoon session, and tiers A, B and C were announced ready for the quarter-final. All of the top four seeds won their quarters and from there, #1 Rob Foster eased past #4 Mark Murray with 75 points to 32 in the semi-final, and #2 Zarte Siempre edged past #3 Ann Dibben with 63 points to 50. The third place play-off between Ann and Mark went to a tie-break conundrum at 92-92, with Ann solving MORALTAPE within four seconds.
Both finalists had already won tournaments this year and precious little separated their performances throughout the day in Bournemouth. Rob maintained the edge however with 499 points from five wins going into the grand final, compared with Zarte‘s 482.
An early upset looked possible after R1 (TKRQUEAOY), as Zarte‘s EQUATOR was not to be beaten by equatory x. Both players then matched each other up until the end of R5 (RF 28-35 ZS) when Zarte‘s choice of six small (9 6 4 9 5 8 – 266) backfired and Rob offered a solution in three moves. With the lead now in hand, Rob moved straight onto the first conundrum and unravelled STALLMORE within two seconds, quickly giving him a 13-point advantage going into half-time.
Into the second half, a steady 8 each from ESTACICLR but then a solo 8 from Rob from TTNPEIAIE would further confirm his lead. Zarte opted again for six small numbers in an effort now to reduce a 21-point deficit (10 2 3 6 1 10 – 872) and both players landed one away with 97×9, the best available solution. Zarte‘s title hopes ended with a risky 8 in the last letters (EDLOSOMAA) when Rob‘s maximum 7 saw his lead become unassailable. A straightforward one large to finish the numbers was followed by a final conundrum (PERRYCOBO, set by Sean) which stumped both finalists and denied Rob a century score. This was correctly unscrambled from the audience by #8 seed Matthew Brockwell, offering up CRYOPROBE, who rose to a 6th place finish but was just denied 5th by a point in his last match.
Many thanks to everybody who took part — we hope you enjoyed the day and were able to take advantage of the sea air, particularly on a bright and breezy Sunday morning that followed. The total points scored across the board just edged into five figures at 10,076 — an average of 458 points per player, or 87 points pro rata for a 15-round match.
Full final standings and stats are available to view here, including the run-down of how many FOCAL points everybody takes from this event onto the 2017 circuit.
A reminder that the next FOCAL events are in Milton Keynes on Saturday (12th August), then in Huddersfield on 7th October, in the run-up to our second end-of-year finals contest in Birmingham in early December.
Plenty to choose from. See you at another event soon!