FOCAL returned to the south coast on Saturday 18th August as Sean Fletcher and Jeff Clayton welcomed 19 entrants to the Royal Bath Hotel’s Sea View suite for a second tournament in Bournemouth. Among the contenders, last year’s winner Rob Foster, and some new faces from Hampshire, Essex and Cheshire.

Based on the World Cup format in football, contestants were drawn into pools of four for the Groups in which they played three 15-round heats matches. A 20th player, Prune, was invented to complete the line-up, competitively set to play one below the available maximum in every round.

From the heats, everyone went forward into Divisions (eight in A, six in B, six in C) for the quarter-finals, with the five players who finished top in their groups qualifying automatically for Division A. 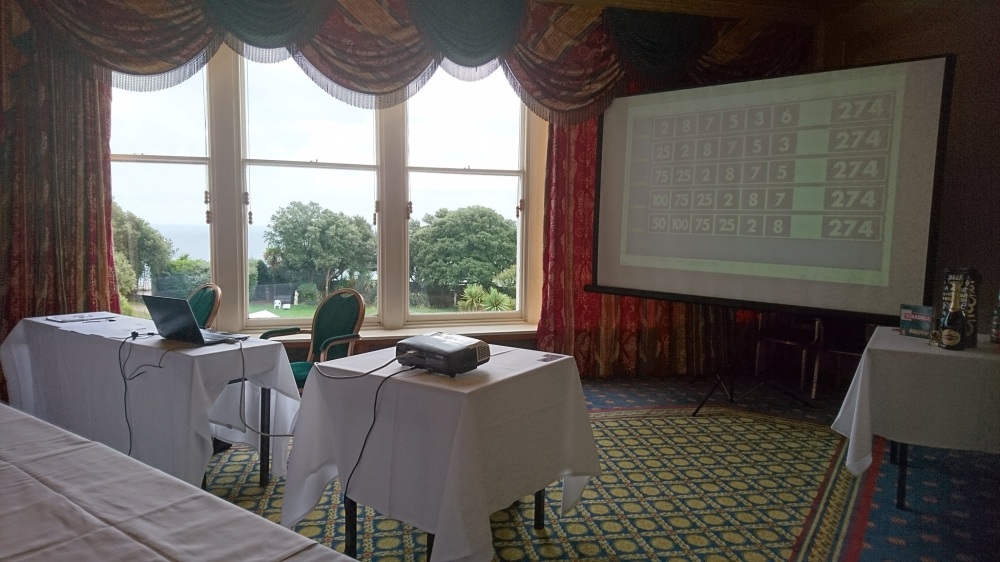 After three games, top of the tree was Rob Foster followed closely by Tom Cappleman — both on 373 points, both notching up individual high scores of 128, separable only on points conceded. Two other group winners, Tim Down and Robin McKay, were also unbeaten. And whilst Toby Pereira posted an upset in defeating Tom Chafer-Cook 98-95, centuries in his other two games saw TCC emerge top of his group to qualify 5th. Nonetheless, Toby’s 279 points were enough to nick the last slot in the top flight, with Jonathan Wynn ahead in 6th and Martin Thomas 7th.

Into the quarters
The next phase of the competition reverted to 9-rounders for the quarter- and semi-finals. Wins in the quarters for seeds 1, 2, 3 and 5 meant Rob Foster would take on Tom Chafer-Cook and Tom Cappleman met Tim Down. Defending champion Foster was then defeated 53-57 in the semi-final whilst Down triumphed 50-46, setting him up for a third Grand Final this year.

The mainstream final, the 14-round format of olde with four numbers games and two conundrums, played out at around 16:30, led by the Third Place Play-Off which Tom Cappleman narrowly claimed 89-86 over Rob Foster. Our two grand finalists sat this match out but took the opportunity to practice and prepare for their encounter, the
event’s showpiece.

The Grand Final
Having qualified as the higher seed, Down called the coin toss but lost, where Chafer-Cook opted to be Player One, knowing he would select the first and fourth numbers games.

Both players opened the scoreline with a steady 6 from FLCAAONEE, the best available, before Chafer-Cook cautiously offered an 8-letter winner in DIABASES. The plural of DIABASIS, the only other 8 in the round, this concerns the state of transitioning from one phase to another, and Chafer-Cook showed early signs of moving the final to something bullish.

A straightforward 1L numbers put ten more points on the board before AEIOARRGB — five vowels and four consonants, coined “a Tim Down special” during the day — added 6 points onto 30-22. BORAGE was declared but BARRAGE was overlooked!

Next, LMNIAEPAN produced PEAIMAN and MANIPLE but both finalists missed the 9-letter MAINPLANE, a principal wing on an aircraft.

Onto the second numbers and Down opted for four large to redress the balance. With 4L 2 7 for 658, both spotted the divisibility by 94 to move their scores onto 47-39. And then the first conundrum, scrambled by Sean as TRANSCALE, went unsolved. On seeing the solution, ANCESTRAL, Chafer-Cook remarked “LANCASTER” for an alternative jumble.

At half-time, there was a brief reprieve with details of upcoming FOCAL events, and Tony Atkins provided some information on the Countdown tournament he is hosting at the Mind Sports Olympiad in London on Sunday 26th August. Full details on the MSO website, where tickets can be purchased in advance.

Into the second half, and Chafer-Cook stepped up his game as TTMEIETJO led him to the six-letter winner MIETJE (variant of MICHI) — both pronounced and spelt correctly, it is the imitative sound of a cuckoo in South Africa. Scoreline TCC 53-39 TD.

PELOIDES and POLISHED were the two 8s from HPLIEODES, before Down changed tactics in the numbers with a six small. The spread of numbers and relatively low target yielded lots of solutions; score TCC 71-57 TD and time was starting to run out for Down.

Four rounds to go, and Chafer-Cook moved more than 20 points in front from MDPIOARIU with the impressive 7-letter max MAROUDI, a tree-dwelling bird resembling a pheasant in Guyana.

Another missed opportunity in the last letters, as the finalists produced FUSSED from OOUUESFDS. Throwing this open to the audience, Suzy Turner’s 8-letter DOOFUSES was applauded, backed up by James Burley spotting the 7-letter variant DUFUSES.

A tricky 1L in the last numbers saw Chafer-Cook eight adrift of the target, whilst Down regained 10 points with a well-spotted method using distribution before multiplying up. Scoreline TCC 84-73 TD.

Into the last round, the second conundrum COBODUELS was unravelled in seven seconds by Chafer-Cook. “SUBCOOLED?”, he said, slightly hesitantly, was right. Final score, Tom Chafer-Cook 94 – 73 Tim Down (solo rounds: TCC 4-1 TD).

Prizes
…were awarded to:

FOCAL standings
Chafer-Cook’s victory moves him up the FOCAL rankings from 31st to 27th, whilst Down’s silver medal lifts him one crucial place from 9th back into the Top 8. Good performances from Tom Cappleman and Jonathan Wynn also strengthen their hold in the top flight; a separate blog post will follow with the updated Tour standings.

The flightpath into FOCAL’s 2018 Finals consists of three more events:

Finals Day is in Birmingham on Saturday 24th November.

Another blog post will follow in the coming days with the updated “as things stand” tour league table.