Host Mark Mills and (spoilers) champion Callum Todd team up to bring you this report from our latest event, on the Lancashire coast.

Just one day shy of a year to the day since last year’s debut bash in Cleveleys, host Mark Mills brought his Blackpool event back this year for a run-out in his new premises in Lytham St. Annes. We were also delighted to welcome Nathan and Katherine to Co:Blackpool on the eve of their first anniversary. I think by now we have forgiven them for missing last year’s event in favour of their wedding.

Our venue was the Mayfield club, the proprietors of which are none other than our very own Mark and Tracey Mills! The early birds arriving on Friday night engaged in a spot of arrow chucking, where host Mark – clearly making up for his ineligibility to compete in the Countdown on the morrow – defeated all comers on home turf, most notably our community’s biggest darts fanatic James Robinson.

The following day, a grand total of 27 players were in attendance at Casa Mills – three of them complete newcomers to the FOCAL scene, and a fourth playing for the first time after attending several previous events as a spectator only. The draw for round one produced some tasty match-ups, with perhaps the most interesting table of 3 being made up of last year’s Co:Blackpool champ Jack Worsley, his dad Paul, and the champion of our last event in Liverpool: Callum Todd. It was Jack who came through that table with two wins to his name, with Callum narrowly defeating Paul on a crucial conundrum in the other contest. 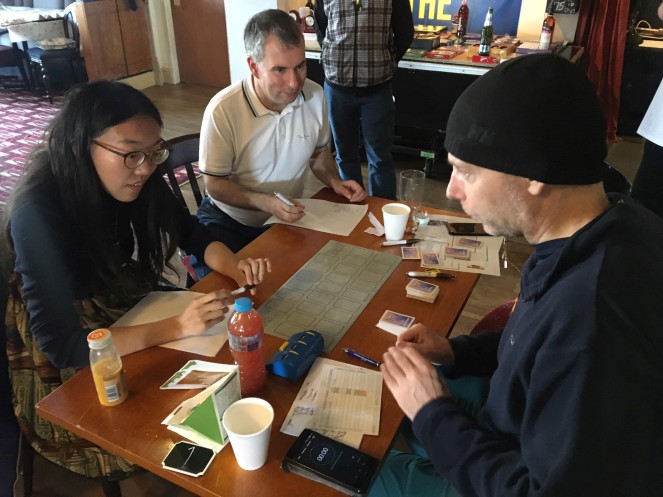 After some lunch everyone was paired up for the quiz, which in the end was won by a pair of Jameses (Robinson and Haughton) who defeated Nathan Pace and Emily Zhang in the final. Round 2 showed some of the big names in this very strong field drawn together, and each of the top three tables ended with one player winning both games to maintain a perfect record after four games played: Bradley Horrocks, Tom Chafer-Cook, and Zarte Siempre (three of the four semi-finalists from Countdown’s most recent Champion of Champions!)

In Round 3, it was Tom Chafer-Cook who added the first blemish to the records of his opponents on the table of the undefeated, guaranteeing him a spot in the final as the only player on six wins out of six. On table 2, an all-West Yorkshire affair saw current FOCAL 2019 #1 seed Callum Todd defeat James Robinson and Thomas Carey to join Zarte on five wins out of six. And it was Co:Blackpool 2018 champion Jack Worsley who emerged victorious from table 3 to level his win  tally with Callum and Zarte’s.

To the great surprise of everyone in the room, co:event history was made as for the first time ever – after over 100 events – two players were tied for second place! Having both amassed exactly five wins and 392 points each, it took an old Countdown rule to break the tie: Callum was advanced to the final because he had solved more conundrums (6) than Jack (4) during his games that day.

As it was recorded and live-streamed, you can watch the final on YouTube below (unfortunately no sound was picked up on the recording):

And so Callum was crowned champion of a second co:event running, the fifth title of his FOCAL ‘career’ and third of the year, cementing him as #1 seed for the FOCAL finals in Wolverhamption this November (more on that later).

Anagramming over with, a keen crowd remained at the Mayfield for food and entertainment. Callum and Bradley played possibly the longest frame of snooker the venue table had ever seen, both of them proving they are much better at Countdown than they are at snooker. Our community’s resident vocal entertainer Ashwin kicked off the karaoke with an impassioned rendition of Taylor Swift’s ‘We Are Never Getting Back Together’, followed by Big Steve Anderson duetting with Callum on ‘Islands in the Stream’, where Callum proved he is much better at snooker than he is at singing.

Free from the shackles of his Yorkshire Dolly, Steve shined solo with hits from Ronan Keating and Bellamy Brothers, as did Zarte with a couple of classics from Rod Stewart and The Rolling Stones. Robbo was Livin’ La Vida Loca, Callum tried his hand at some Eminem, Thomas Carey mistook the karaoke stage for a regional pride rally, and Emily made perhaps the ballsiest choice of all by smashing ‘Witch Doctor’.

Those not exhausted by a full day of Countdowning and karaoke returned on Sunday for a group visit to Blackpool Pleasure Beach. They were joined there by Mike Springett, who wasted no time in getting stuck in to ‘The Big One’.

Blackpool 2019: Mike Springett takes on ‘The Big One’

And that concluded a thoroughly enjoyable weekend in Blackpool. We are all hoping that the Millses will have us round again next year to repeat the festivities. In the meantime, we have one event left – in Braintree – this year before our end-of-year showpiece extravaganza in Wolverhampton! Be sure to book your place(s) at those events now to avoid disappointment. Hopefully we shall see you there.

You can peruse the full results from Co:Blackpool here.