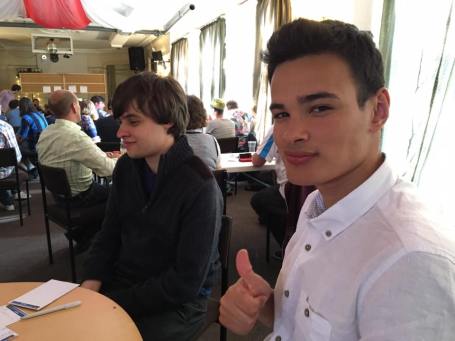 Yes, Innis and I are back for Mk3 – and this time, it’s personal (other misplaced film quotes are available)

It’s been one of the biggest events the last two years, but this year we’re simply striving to make it the best yet. Expect mischief, mirth, and mishaps, but most of all, expect it to be fun with a capital mildly intoxicated.

Doors will open to the upstairs room of the New Queen Victoria pub in Wolverton (same venue as previously) at 10:30am on Saturday 12th August, with the draw at 11am, and the games starting at 11:15.

It will cost you £16 to get in those doors, although preferably, you’ll have paid that in advance, and we won’t have to hire any door staff. These payments can be made via PayPal to Innis’ account – innis_carson@hotmail.co.uk – This is the same price as last year, and will also be the same price next year, barring enforced change of venue. However in 2018, if you entered in 2017, you’ll receive £1 off!

Things you will receive for this £16:

A minimum of 8 games of Countdown (barring disaster) – The format will be the same. 8 qualifying 9-rounders, 3 before lunch, 3 after, and 2 after a quick break, before a final to decide who will be the 3nd name on the Concrete Cow Cup. Which is still a shield. The 3 games before lunch will be done from a seeded draw based on the results of the last 2 years’ .co.mk – players will be assigned to pot A-D and one from each pot will be drawn to play against one another in a 4-person round robin. This does mean that those who haven’t turned up previously will be put into pot D, sorry about that, but I don’t believe in seeding based on other events. You will potentially get a nicer draw next year though!

To get to relentlessly mock Innis on his birthday – yes, it’s his actual birthday! If anyone has any good ideas of how we can commemorate this, then please do let me know!

To visit the only event that has it’s own sound man – Jason Leslie is back and he’s ready to take the piss out of everybody (mainly me) once again!

The chance to win some cool prizes, both for good performances, and for other things across the day, including this year’s side competition, to be announced at a later point (it doesn’t involve Moles being stuck on the ceiling)

Your very own terrible personalised poem upon entry (on Facebook) – not entry to the actual building. I suspect poetry may have abandoned me by then.

And probably some other stuff I’ve forgotten about.

Other things you should know:

The venue is in Wolverton, which is one train stop on from Milton Keynes Central. There isn’t very much in Wolverton though, and people tend to go out on the Friday and Saturday in Milton Keynes itself, so if you’re planning on booking a hotel, I would advise doing so in the centre. There are several options, although Travelodge and Jury’s Inn tend to be the 2 that come out on top most often. Milton Keynes Central travels directly to and from lots of places, including London, Birmingham, Manchester and Edinburgh.

Food options are abundant both in MK and in Wolverton, however as our venue is a pub that has its own café – that is probably the most convenient – however order in advance, because they have a habit of being understaffed and making people wait.

There are a few parking options located in the immediate vicinity, or you can park in the Tesco car park, which stupidly haven’t put any rules in place about it. I would maybe condone buying at least a scratchcard from them though, so they don’t become inclined to put said rules in place for next year.

Any questions, just ask – otherwise, bring it on!”